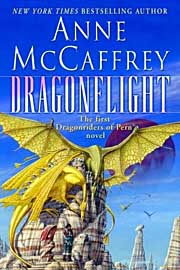 This fantasy series tells the story of inhabitants of Pern, a pristine and beautiful planet colonised when earth became too polluted and overcrowded. The suitability of the planet is marred by periodic attacks from space by the destructive Thread, a space-borne spore that destroys organic substances – and hence, humans - on contact. The settlers discover that a native life form, the fire-lizard, has developed adaptations against Thread.

The first book in the series starts when the society is well-established, and focuses on the character Lessa, who is working disguised as a kitchen girl, but is on the brink of reclaiming her stolen birthright. Everything changes, however, when she meets a queen dragon. They develop a strong bond which provides vital protection when, for the first time in centuries, Lessa's world is threatened by Thread. Dragons and their Riders once regularly protected the planet from Thread, but there are very few of them left these days. Now Lessa must risk her life, and the life of her beloved dragon, to save her beautiful world...

Note: The books in this series, also known as 'Dragonriders of Pern', are listed in order of publication. For a list of the books in chronological order, please refer to the series website.