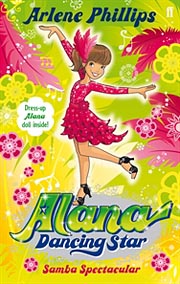 Alana is totally mad about dance, but will her samba routine be good enough for the big Latin show? Alana has a mum Suzanne and sister, Abi, who pesters her non-stop at home, while at the dance studio, she has to put up with the snotty Verity and clumsy new girl Alice.

Tomorrow's the big Latin show at Step Out Studio: but her Samba routine still isn't good enough and now mum's forgotten to make her dress. Things could be heading for major disaster! So when Alana discovers Mademoiselle Coco's mysterious costume shop she can't believe her luck. Not only does she find the perfect dress, but it marks the beginning of a wonderful magical adventure of dancing and making new friends at the Brazilian carnival.