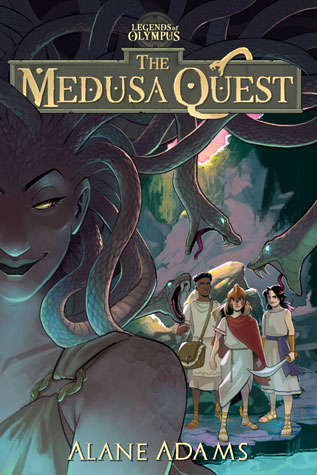 Phoebe Katz is back on a new mission to save Olympus and undo the fallout from her first visit. Damian has troubling news—the epic mythology stories in the books are changing. Instead of Perseus slaying Medusa and becoming a hero, the books now say he’s turned to stone. Worse, thanks to Phoebe slaying the Nemean lion and the Lernean hydra to complete the Eye of Zeus, Hercules failed his first two trials—which means he’s not the immortal hero he’s supposed to be.
After speaking with the oracle who brought her to New York, Phoebe learns that without great heroes, the entire fabric of Greek mythology is in peril. She must go back to Olympus and right the history she wrecked. To do that, she must embark on a quest to collect the items she will need to help Perseus defeat Medusa, including the curved blade the Argus Slayer, the winged shoes of Hermes, and Hades’s Helmet of Invisibility, and convince Hercules to complete his new trials without giving up—despite the efforts of a powerful force that will stop at nothing to see the demi-god children of Zeus destroyed.
Can Phoebe collect the items she needs and save Olympus once again?