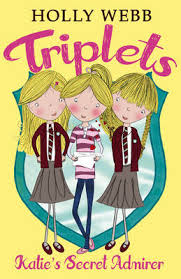 When Katie gets the first note in her rucksack she thinks someone's playing a joke on her. But after she receives two more notes from a mystery schoolmate - one of them asking her to dance at the Valentine's Ball - she knows it's serious. Katie can't imagine any of the boys she knows sending her love notes, and frankly, she'd rather not find out - Bel and Becky's frenzied excitement has made her totally bored of hearing about boys and Valentine's Day. Katie wants her admirer to stay secret - preferably for ever!