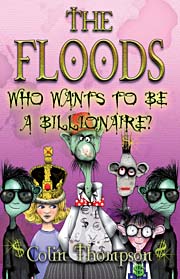 Who Wants to Be a Billionaire?

by Colin Thompson (Author and Illustrator)

The Floods take on Wall Street and solve the global financial crisis in the ninth book of their hilarious, bestselling adventures.

And just when things are about to get even worse, the Floods set up Summer School in New York and take control. Hooray, help is at hand - but as they say, charity begins at home. So millions of people will probably lose millions more dollars, but it will all work out fine in the end. Well, for the Floods anyway. Hey, come on. They're witches and wizards, not some sort of charity.