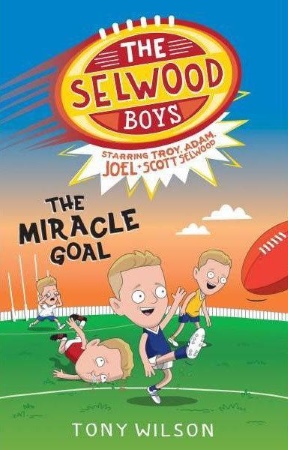 Four future AFL stars under one roof!? Go back to where it all began with The Selwood Boys... In the Selwood house, there's madness and mayhem every day – and footy, of course!

Meet the Selwood boys. There's the twins, Troy and Adam, pulling pranks and making mischief, then Joel with his sneaky, cheeky antics, and finally little Scott, who just does his best (or make that his worst!) to keep up.

About the stars: The Selwood brothers are four of the AFL's favourite sons. Troy Selwood played for the Brisbane Lions from 2005 to 2010 and his twin brother Adam Selwood was a Premiership player for the West Coast Eagles. Joel Selwood is a three-time Premiership player, four-time All-Australian, four-time AFLPA Most Courageous Player and the current captain of the Geelong Cats. Youngest brother Scott Selwood was vice captain of the West Coast Eagles and their 2012 Best and Fairest, before joining Joel at the Geelong Cats in 2016.