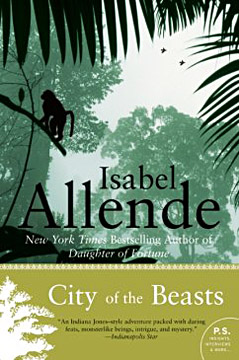 The Eagle and Jaguar Series

Fifteen-year-old Alexander Cold has the chance to take the trip of a lifetime. With his mother in hospital, too ill to look after him, Alex is sent out to his grandmother Kate – a fearless reporter. Kate is about to embark on an expedition to the dangerous, remote world of the Amazon rainforest, but rather than change her plans, she simply takes Alex along with her.

They set off with their team—including a local guide and his daughter Nadia, with her wild, curly hair and skin the colour of honey—in search of a fabled headhunting tribe and a legendary, marauding creature known to locals only as 'the Beast', only to find out much, much more about the mysteries of the jungle and its inhabitants. In a series rich in adventure, magic and spirit, internationally celebrated novelist Isabel Allende takes readers of all ages on a voyage of discovery and wonder, deep into the heart of the Amazon.