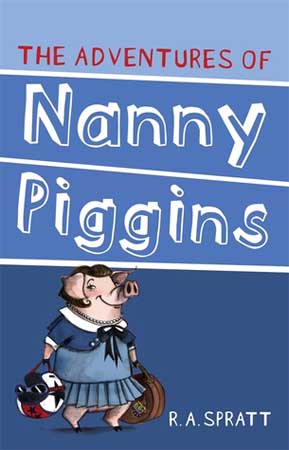 When stingy Mr. Green planted a 'Nanny Wanted' sign on his front lawn for his three children, he had no idea his ad would be answered by a pig. Yes, a pig. A fabulously sassy and impeccably dressed pig as a matter of fact!

Nanny Piggins, the world's most glamorous flying pig, has run away from the circus and is in need of a place to put up her trotters. This is an opportunity too good to refuse! The Green children, Derrick, Samantha and Michael, fall in love with her instantly. Who could not fall in love with a nanny whose only job qualifications are her astonishing ability to be fired out of a cannon and her amazing ability to make chocolate cake...sometimes both at the same time!

With her insatiable urge to eat chocolate (and feed chocolate to everyone she loves), her high-flying spirit, and her unending sense of fun, Nanny Piggins takes Derrick, Samantha, and Michael on a year of surprises, yummy treats, and adventures they'll never forget.

Mary Poppins, move over - or get shoved out of the way. Nanny Piggins has arrived... Stuffing adjectives into this review is as easy as watching Nanny Piggins stuff pies into her mouth. This is smart, sly, funny, and marvelously illlustrated with drawings that capture Nanny's sheer pigginess. Readers may worry that this first novel is full of so many stories about Nanny Piggins there won't be enough left for sequels. Never fear. The last line of the book predicts Nanny will be stirring up more adventures, "possibly even before breakfast." [Booklist (American Library Association)]