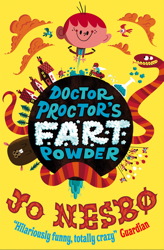 When eleven-year-old Nilly moves to his new neighborhood in Oslo, Norway, he meets his neighbor, Doctor Proctor, an eccentric professor who invents wacky potions and powders – including an industrial strength fart powder that can send people to outer space!

Doctor Proctor, Nilly, and his new friend Lisa must go to great lengths to protect the invention and keep it out of the hands of their neighbors, who try to use the powder for evil purposes. This witty, magical series captures the spirit of Roald Dahl and the zany humour of Andy Griffiths, while Mike Lowery's cheerful illustrations are reminiscent of Dav Pilkey's 'Captain Underpants' cartoons. Even the most reluctant of young readers will be engrossed in this wacky comedy adventure series.