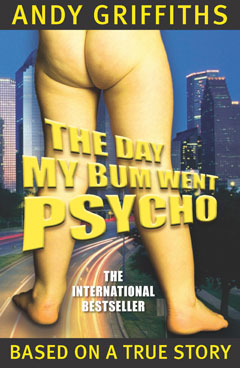 Described as a series of 'carefully plotted comedy thrillers, one part Lara Croft adventure and two parts Monty Python daftness', the epic BUM/BUTT trilogy tells the story of Zack Freeman, his crazy runaway bum, a crack bum-fighting unit called the B-team and some of the biggest, ugliest and meanest bums ever to roam the face of the Earth. In Book One (The Day my Bum Went Psycho) Zack foils a worldwide bum rebellion. In Book Two (Zombie Bums from Uranus) he fights an intergalactic bum invasion and in Book Three (Bumageddon: The Final Pongflict) he travels back in time to fight a terrifying range of prehistoric bumosaurs. The trilogy is accompanied by an illustrated guide to prehistoric bumos