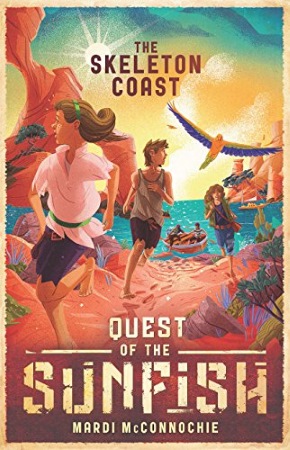 Annalie and Will's father, Spinner, is still on the run from the Admiralty. With their friends, Essie and Pod, and the talking parrot, Graham, their journey has taken them through dangerous waters, ferocious storms and marooned on abandoned islands. They've come heartbreakingly close to Spinner, only to be driven apart once again by their old nemesis, Beckett. While the Sunfishcrew loses precious days to yet another pirate attack, Spinner is fleeing south, to the mysterious land of Sundia.

Now, the terrifying emptiness of the Outer Ocean lies between the Sunfish and Spinner.Even if they manage to cross it – with Beckett still hot on their tail – Sundia is a land forbidden to all outsiders. What awaits them beyond Sundia's Skeleton Coast-the greatest danger they have yet faced, or answers and journey's end at last?

The thrilling conclusion to the Quest of the Sunfish series.

Quest of the Sunfish Series—Summary and Book Order