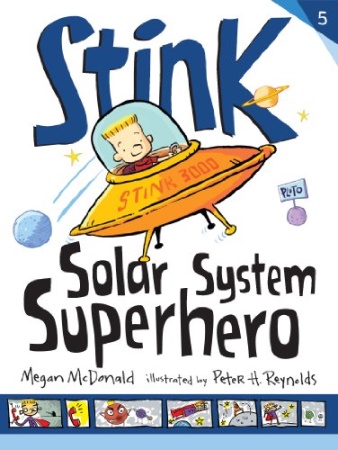 Look! Up in the sky! Is it a falling leaf ?
A speck of dust? A speeding mosquito?
No, it's Stink Moody, Solar System Superhero!

When Stink learns that Pluto has flunked out of the Milky Way for being too shrimpy, he feels like he might just explode with a Big Bang. Stink has no choice but to take a stand for the sake of little planets (and little people) everywhere. Will he be smart enough to defeat a panel of big-shot scientists? Will he be strong enough to beat know-it-all Riley Rottenberger and her "Team KPB"? Will he succeed in rescuing Pluto from a fate worse than being swallowed by a black hole? Start the countdown for a funny (and very informative) out-of-this-world adventure – and prepare to have your universe rocked!