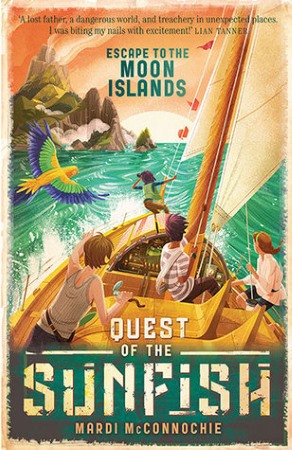 Escape to the Moon Islands

When Will and Annalie's father disappears, the two children and their friends, Essie and Pod, set out on a perilous sea voyage to try and find him. Their world has been transformed by the Flood, a catastrophic human-caused event which has permanently raised sea levels. The crew of the Sunfish discover a world of adventure on the high seas which will test their ingenuity, their sailing skills, and their friendship to the limits.

During the voyage they face many hazards, from storms at sea to pirates, but the biggest threat of all comes from the Admiralty, the all-powerful navy that rules the oceans of the world. The Admiralty are supposed to be the good guys, but the deeper the children go into the Moon Islands, the more they realise that nothing is what it seems.

Quest of the Sunfish Series—Summary and Book Order