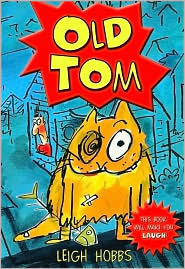 Old Tom's owner, Angela Throgmorton, has been invited to tea. Not just any tea...tea with the queen So Angela brushes up on her manners and insists that her rebellious cat, Old Tom, do the same.

This hilarious chapter book introduces Old Tom, his outrageously bad behavior, and his honest but ill-fated attempts to be good. Hilarious mishaps and outrageous mayhem ensue at the palace, only to end with a scandal of Old Tom proportions