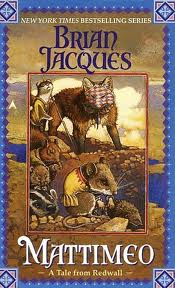 In the summer of the Golden Plain, preparation for a great feat are underway at Redwall Abbey, and the young mouse Mattimeo is contributing his share of the labors.

But Mattimeo is the son of Mathius, the guardian of Redwall Abbey, and it is this fact that makes him the target of a fiendish kidnapping plot contrived by the vicious fox, Slagar the Cruel.

When Mathias and his brave followers abandon heir homes and face enslavement for the return of their children, the captive Mattimeo stands to prove his worth - and an unexpected hero is born.