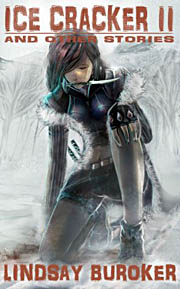 She's wanted for crimes against the throne. He's the empire’s most notorious assassin. With bounties on their heads, they’re not likely candidates for heroics, but they're on a quest for redemption. Unfortunately, they'll have to pursue and conquer great threats to earn the emperor's recognition.

Ice Cracker II—When wanted criminals Sicarius and Amaranthe unearth a plot against the military’s premier ice breaking ship, they may be the only ones who can thwart the saboteurs...if the soldiers don't kill them first.

Through Fire Distilled—An assignment to investigate a "haunted" distillery turns sour when mercenaries try to collect on Amaranthe's bounty.

The Frozen Water Trade—A mission to help an old friend results in a night trapped in a cabin with blizzards and underworld predators on the outside and vengeful relatives on the inside. Alas, it's bad form to kill the client's father.