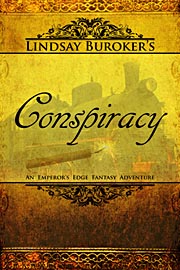 When you're an outlaw hoping for a pardon, and the emperor personally sends a note requesting that your team kidnap him, you make plans to comply...

Even if it'll involve infiltrating a train full of soldiers, bodyguards, and spies loyal to a nefarious business coalition that has numerous reasons to hate you.

Even if it means leaving the city right after you've uncovered a secret weapons shipment that might be meant to start a war.