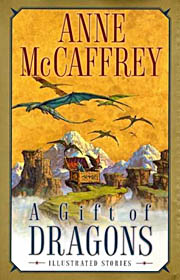 A Gift of Dragons

For more than thirty years, Pern has conjured visions of brave men and women mounted upon the backs of dragons. As anyone knows who has been touched by the storytelling magic of Anne McCaffrey, to read of the exotic world of Pern is to inhabit it - and to experience its extraordinary dragons is to soar aloft with them and share their dazzling adventures.

Now, A Gift of Dragons brings together three previously published beloved stories and a thrilling new tale of Pern in a single volume illustrated with beautiful artwork by Tom Kidd. In 'The Smallest Dragonboy', Keevan is the youngest dragonrider candidate, determined to impress a dragon when the next clutch of eggs hatches. But what transpires will surprise everyone - Keevan most of all. In 'The Girl Who Heard Dragons,' a young girl's rare ability to communicate with dragons puts her family in danger and will bring her face to face with her greatest fears - and with her most secret desire. The 'Runner of Pern' is a girl named Tenna, who follows family tradition by delivering messages - and who will find her destiny on the mossy traces that runners have used for centuries under the dragon-filled sky. And finally, an exciting new Pern adventure, 'Ever the Twain', published for the first time in this collection.