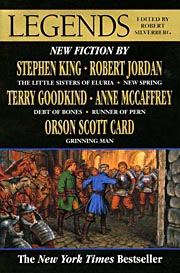 Acclaimed writer and editor Robert Silverberg gathered eleven of the finest writers in Fantasy to contribute to this collection of short novels. Each of the writers was asked to write a new story based on one of his or her most famous series: from Stephen King's opening piece set in his popular Gunslinger universe to Robert Jordan's early look at his famed Wheel of Time saga, these stories are exceptionally well written and universally well told. The authors include King, Jordan, and Silverberg himself, as well as Terry and Lyn Pratchett, Terry Goodkind, Orson Scott Card, Ursula K. Le Guin, Tad Williams, George R.R. Martin, Anne McCaffrey, and Raymond E. Feist.

Note: The story in this collection that belongs to the Pern series is called 'Runner of Pern' and is set shortly before the Ninth Pass. It tells of a runner (messenger), Tenna, who is new to the role but skilled. One night, when she is running on the "trace" (paths marked by moss that are reserved for runners only), a cart pulled by runner beasts runs her off the trace. Tenna falls into a stickleberry bush, and her body is pierced by many potentially poisonous spines. After she recovers, she endeavours to find out who caused her accident by illegally using the path.

Note: The short story 'Runner of Pern' can also be found in a later collection, 'A Gift of Dragons' (Book 20), together with three other short stories that form part of this series (but are also published in other books); namely, 'The Smallest Dragonboy' (in 'Get Off the Unicorn'), 'The Girl Who Heard Dragons' (in the 'Girl Who Heard Dragons'), and 'Ever the Twain' (in 'A Gift of Dragons').