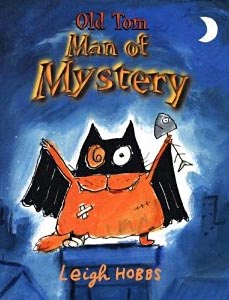 An hilarious spoof of a cat-and-mouse game played out by a mischievous cat and his loyal and good-natured owner, Angela Throgmorton.

One morning, an overworked Angela decides that the time has come for Old Tom to help out a bit around the house. But when Angela makes a list of chores for him, Tom suddenly becomes sick. Angela puts him to bed and tells him to rest but Old Tom has other ideas. So while Angela is busy dusting and wiping and scrubbing and sweeping, Old Tom gets busy too ...changing into the Man of Mystery!

Angela bakes some cakes and then notices fur on her freshly scrubbed floor. Later she finds crumbs on the carpet that has just been swept. But when Angela is awakened by strange footsteps in the middle of the night, she decides it is time to investigate. Soon she is off on her own adventure, shadowing the Man of Mystery!