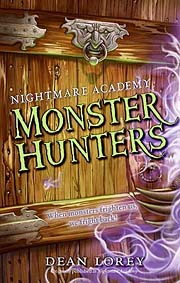 When Charlie Benjamin's nightmares bring monsters to Earth, he gets a once-in-a-lifetime chance to learn to control his powers at the incredible Nightmare Academy.

An unexpected crisis during Charlie's entrance exam, catapults him into action-packed adventure on behalf of The Nightmare Academy, an organization that trains gifted children to help contain nightmare creatures - brought into world via children's bad dreams - and banish them to the Netherworld. Then monsters under your bed are real!

But never fear - the Nightmare Academy will train Nethermancers and Banishers like you to destroy them! Join Charlie and his friends as they battle evil in this fast-paced, action-packed series.

Note: Dean Lorey has plans to write another three books in this series, but the time-frame is indefinite.