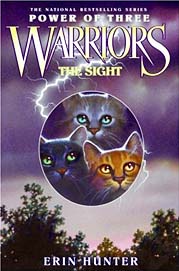 The Warriors: Power of Three Series

In this third Warriors series, the stories are centered on the prophecy, "there will be three, kin of your kin, who hold the power of the stars in their paws", which was given to Firestar by Skywatcher, in Firestar's Quest. The series follows three young cats named Hollyleaf, Jayfeather, and Lionblaze, who are Firestar's grandkits, apparently making them the cats of the prophecy. Jayfeather is blind, but soon discovers he has a unique power; Lionblaze power is revealed, too; but for Hollyleaf, discovering her power is not so straightforward...