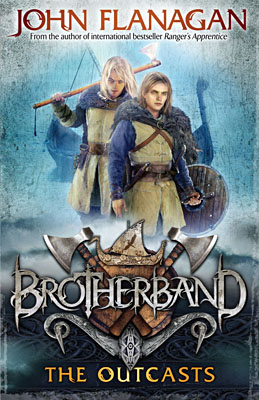 Skandians, as any fan of Ranger's Apprentice can tell you, are known for their physical strength. Though Hal, Stig, and the other outcasts may be lacking in that area, they more than make up for it with their intellect and courage - which they'll need every ounce of if they're to compete in the ultimate competition. From tests of strategy to races on treacherous seas, these Skandians will be pitted against some of their country's most promising young warriors. And for some it's more than just a game. It's war.

John Flanagan, author of the international phenomenon Ranger's Apprentice, creates a new cast of characters to populate his world of Skandians and Araluens.

John Flanagan's "Brotherband Chronicles" takes up the story of the Skandians introduced in the Rangers Apprentice books. The first book is 'The Outcasts' and revolves around the young men of the village who are in training to become fully-fledged raiders on the longships. The boys are trained in fighting, sailing, teamwork and leadership, but it is their back stories that drive the narrative. Hal is the hero of the series. He has a ragtag bunch of mates, and each of them has something in his history that sets him apart from the rest of the village. Hal's mother is Skandian, but his father was Araluen, and this makes Hal an outsider in some of the villager's eyes. His friends all have their own family problems - one parent is a thief, another a drunkard, yet another a 'cripple' - but in training, it is teamwork and support that wins the title. Can Hal bring his team together to win the Brotherband competition? Flanagan is acknowledged as one of the premier writers of adventure fiction for young people, and the Brotherband Chronicles follow in that tradition. Recommended for readers from Year 5 to adult, male AND female. This is a great favorite of my 16 year old daughter, and her 46-year-old parents!