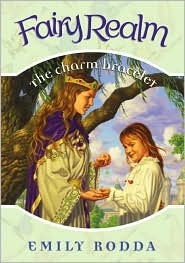 While Jessie is visiting her grandmother, she's amazed to discover an invisible door in her grandmother's garden. This secret door leads to the magical world of the Realm - a land of fairies, water sprites, gnomes, unicorns and other fantastic beings, where a noble Queen rules, and a high hedge keeps out dangerous creatures. So starts Jessie's thrilling adventures in the Fairy Realm. Jessie is an appealing heroine; an ordinary, likeable girl, feisty enough to help her new friends in the Realm when danger befalls them.