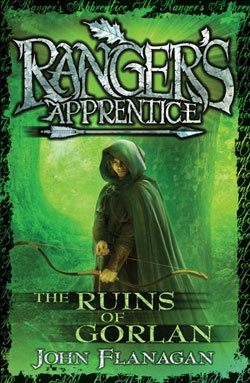 They move silent as shadows. They climb impossible heights. Their archery skills are unsurpassed: they are Rangers. Read the mega-bestselling series about Will and his friends from Castle Redmont.

Each Ranger is an expert archer, and highly skilled at tracking, concealment and unseen movement. Rangers ride a special breed of horse that looks nondescript, but has amazing speed and almost limitless endurance. A Ranger horse will respond only to its master, will warn of danger, and respond instinctively to the Ranger's commands. There are fifty Rangers in the Corps, one for each of the Kingdom's Fiefs. Although they work with the Barons, the Rangers answer only to the King. In time of war they work with the highest commanders of the King's army, giving tactical advice and providing intelligence on the enemy's movements. Occasionally, a young man who is judged to have the right qualities will become a Ranger. Note: .

YouTube Review (with no story spoilers) by Kitty G