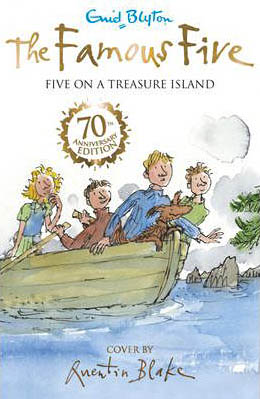 The Famous Five are a group of children who have the sort of adventures most kids dream about, in a world where ginger beer flows and ham rolls are a staple diet. Julian, Dick and Anne get together with their cousin, George in the first adventure, 'Five On A Treasure Island'. George is actually a girl who wants so desperately to be a boy she crops her hair and struts about doing boy things. She hates it when people call her by her correct name, Georgina. She has a dog called Timmy - oh yes, and an island. Most kids just have a dog, but George's parents own Kirrin Island and let her run around on it as if it were her play-thing. Her parents are known to Julian, Dick and Anne as Uncle Quentin and Aunt Fanny.