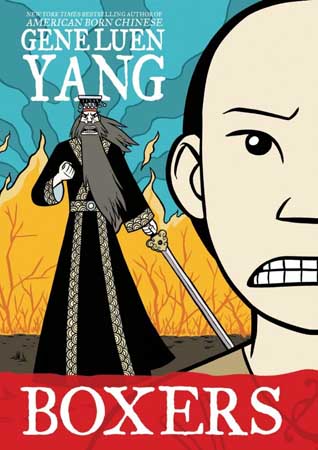 The Boxers and Saints Series

Boxers & Saints is an innovative new graphic novel in two volumes – the parallel stories of two young people caught up on opposite sides of a violent rift. American Born Chinese author Gene Luen Yang brings his clear-eyed storytelling and trademark magical realism to the complexities of the Boxer Rebellion and lays bare the foundations of extremism, rebellion, and faith.


Boxers & Saints keeps alive a tradition of literature that has been known to us for centuries: the tragedy. Boxers details the life of Lee Bao, a young man who is determined to rid his country of foreign influence. Saints concentrates on the life of Four-Girl/Vibiana, a character to whom we are introduced in Boxers and from whose viewpoint we see another side of the Boxer Rebellion. Four-Girl/Vibiana is not necessarily convinced that the colonisation and missionary work of the foreigners in China is the best thing for her country; but she is also lonely and finds with the foreigners a community and even love. Through both protagonists’ eyes, readers are treated to a complex story of culture, identity, faith and love.