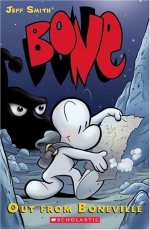 The Bone adventures tell the story of a young bone boy, Fone Bone, and his two cousins, Phoney Bone and Smiley Bone, who are exiled from their homeland of Boneville. When the cousins find themselves mysteriously trapped in a wonderful but often terrifying land filled with secrets and danger and special new friendships, they're soon caught up in adventures beyond their wildest dreams.

This epic adventure series in the tradition of Tolkien's Lord of the Rings is credited with breathing new life into the graphic novel format and introducing successive generations of readers to the wonder of narrative comic books.