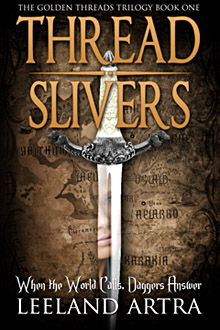 Ticca is a newly-minted Dagger, a young honorable mercenary out to prove her worth in the big city.  Her first job seems like a simple one, but it sets her on a path to a destiny bigger than she ever dreamed.  The friends she makes along the way may have destinies of their own to fulfill: Lebuin a new Journeyman mage and a fastidious dandy, has just learned to his horror that his new rank involves actual journeying—and dirt! And Ticca is worried about Lebuin's humble servant, Ditani, as she is sure he is more than he seems and might be a spy for Lebuin's nemesis.

The three of them are swept into a series of deadly events. Fighting to stay ahead of their adversaries, they stumble into secrets that catapult them towards disaster that even the Gods are not prepared for.