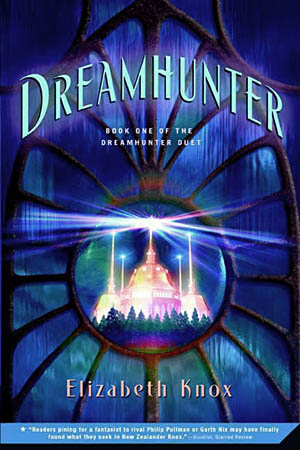 Set in 1906, Dreamhunter describes a world very similar to ours, except for a special place, known simply as The Place, a mysterious region filled with dreams of every kind. Only a select group of people can enter The Place: The Dreamhunters, men and women who are able to 'catch' the dreams and relay them to eager audiences in the magnificent dream palace, The Rainbow Opera.

Fifteen-year-old cousins Laura Hame and Rose Tiebold both come from famous dreamhunting families. Now, they are about to find out whether they, too, are part of this prestigious group of Dreamhunters. But nothing in their darkest nightmares can prepare them for what they discover. For within The Place lies a horrific secret kept hidden for years by corrupt members of the Government. A secret that demands to be told...

Note: The Dreamhunter Duet has also been combined into an Omnibus edition, titled 'The Invisible Road', which won the anthology section of the Julius Vogel Awards in 2009. The duet has also been published in a single book titled, 'The Rainbow Opera'.