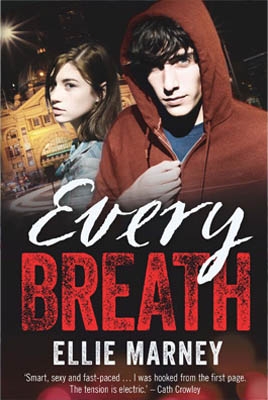 What if Sherlock Holmes was the boy next door?

Rachel Watts has just moved to Melbourne from the country, but the city is the last place she wants to be. Her neighbour, James Mycroft, is an intriguingly troubled seventeen-year-old who's also a genius with a passion for forensics.

Together the two are drawn into solving murders more complex than they first appear. While the police might be keen to neatly close a case, Mycroft and Watts want the truth. And with persistence and savy, they're going to find it...

Sizzling chemisty and urban intrigue combine in this thriller. 'Quirky and real, fast-paced and full of great characters...I was hooked from the first page.' - Cath Crowley

Every Series Books in Order

Every Breath is a breath of fresh air in the mushrooming realm of young adult fiction. Ellie Marney has written a crime novel rich in romance, flawed characters and realistic dialogue, with an edgy storyline that quickly draws the reader in with its moody narration.

When we meet Watts and Mycroft they are already good friends, navigating a complex and awkward relationship that resonates with the tension of new sexual awareness. The angular, intense, and somewhat desperate Mycroft pulls at the heart strings of Rachel Watts, a girl feeling displaced and resentful after the loss of her family’s farm and an enforced move to the city of Melbourne.

The two are inadvertently drawn into solving the murder of a homeless man they’ve befriended. Already keenly interested in forensics (an elective class they take at school) their inquiries and sleuthing lead them to some dark encounters. Despite admonishment from the police, the teens are compelled to continue their own investigations.

Two adolescents embarking on a murder investigation is a difficult storyline to keep grounded, yet Marney successfully walks that fine line between the believable and the just-plain-unlikely without crossing into farce.

A solid plot and genuine characters with great chemistry, combine to create a refreshing and authentic novel. It’s a thoroughly engaging story that’s hard to put down and creates a mood that lingers long after. I am poised for books two and three in this crime trilogy, with the next in series, Every Word, due out in 2014.