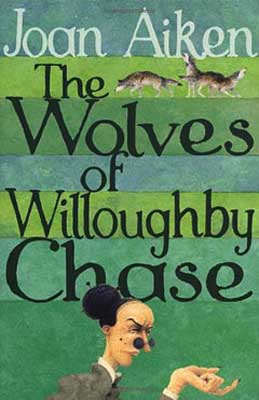 Joan Aiken's remarkable series of alternate history novels are set at a time when ravening wolves have invaded England from the wilds of Europe through the newly opened Channel Tunnel linking Dover and Calais, and travellers ride in steam trains and hot air balloons over the snowy landscapes to evade wolves and other desperate enemies.

On the throne a dynasty of good Stuart kings are in constant danger from dastardly Hanoverian and Burgundian plotters threatening to blow the country to kingdom come...

From a Dickensian London the travels of Dido Twite, the spirited cocknney heroine of many of the books, whisk her all around the world on a series of adventures at sea and throughout fantastic foreign lands. Later novels introduce her sister IS and cousin Arun who join her and her friend Simon in their fight to save the kingdom.

Aiken's imagined world gave her the freedom to include whatever she wanted – tidal waves and volcanoes, flying monsters and man-eating birds, from Saxon battles and Arthurian legends to Indonesian magicians or silent religious sects...even Steam Punk was born with this series! Although there is a story connecting all the books, each one may be enjoyed separately. This is a world that, once entered, you will never forget.