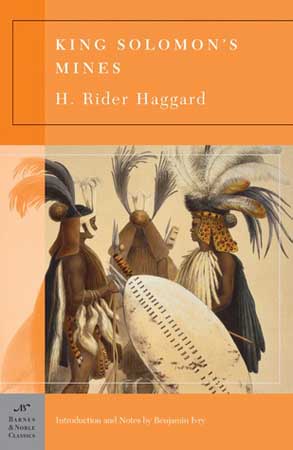 H. Rider Haggard's Allan Quatermain series has entertained generations of readers since the initial publication of King Solomon's Mines in 1885. Allan Quatermain is an English-born professional big game hunter and occasional trader in southern Africa. He is an imperial outdoorsman who finds English cities and climate unbearable. He prefers to spend most of his life in Africa, where he grew up under the care of his widower father, a Christian missionary.

Following a mysterious map of dubious reliability, our hero and a small group of loyal men trek into southern Africa in search of a lost friend – and a lost treasure, the fabled mines of King Solomon. Together they discover a frozen corpse, survive untold dangers in remote mountains and deserts, and encounter the merciless King Twala en route to the legendary hoard of diamonds.

The first great "Lost World" action-adventure series – a precursor to Indiana Jones and a classic tale of bravery and exploration like no other. See also the Ayesha series by H. Rider Haggard.