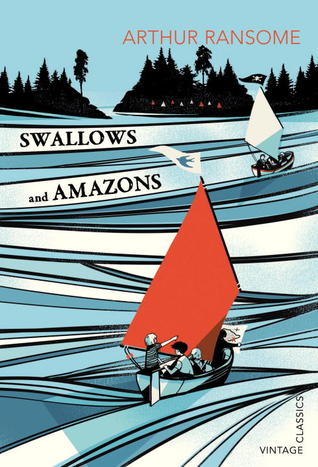 The Swallows and Amazons Series

John, Susan, Titty and Roger Walker sail their boat, 'Swallow,' to a deserted island for a summer camping trip. Exploring and playing sailors is an adventure in itself but the island holds more excitement in store. Two fierce pirates from the boat 'Amazon,' Nancy and Peggy, challenge the Walker children to war and a summer of battles and alliances ensues.

For anyone who loves sailing and adventure, Arthur Ransome's classic 'Swallows and Amazons' series stands alone. Originally published in the UK over a half century ago, these books are still eagerly read by children, despite their length and their decidedly British protagonists. We attribute their success to two facts: first, Ransome is a great storyteller and, second, he clearly writes from first-hand experience.

Independence and initiative are qualities any child can understand and every volume in this collection celebrates these virtues. 'Swallows and Amazons,' the book that started it all in 1930, introduces the Walker family, the camp on Wild Cat Island, the able-bodied catboat 'Swallow,' and the two intrepid Amazons, plucky Nancy and Peggy Blackett. Readers who enjoy Enid Blyton's 'The Famous Five' or 'The Secret Seven' adventures will be entranced by this classic series.