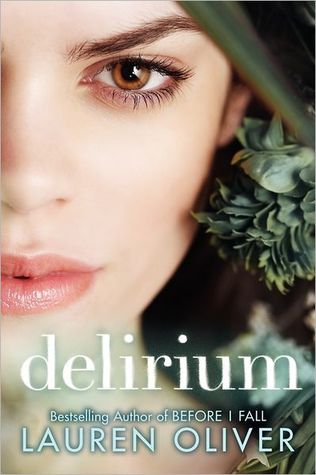 Lena lives in a world where love is considered a disease - the deliria - the source of all unhappiness and negative emotions, including anger, pain, jealously and hate. Scientists have found a cure for love, and the controlling government seeks to eradicate the deliria by forcing all citizens to be cured at age 18. But even those fully indoctrinated with the government's propaganda are in danger of catching the disease before they are cured, and Lena does the unthinkable and falls in love.

Seeing the society she's always believed in through new eyes, Lena is set on a dangerous course, both for her heart and her life.

Unlike some trilogies that start out strongly and waver, Delirium is a series that gains pace and builds tension as it progresses. The storyline moves in unexpected ways, and there are definite cliff-hangers at the end of books one and two—Delirium and Pandemonium—that raise the stakes. Lena, Hana, Alex and Julian, as well as many of the supporting characters, are thoughtfully developed and engage the reader at an emotional level. This story is about the freedom to love—not just romantically, but across friendship and familial relationships, as well. (The romantic relationships are subtly treated; heartfelt without venturing into detail.) Set against a controlling dystopian society, those who want to live freely are forced to fight against eradication.

Lauren Oliver is a talented writer who is able to describe elements of nature or the bleakness of the city in ways that create a sharp picture in the mind’s eye, but never slow down the momentum of the novel. A disused parking structure takes on a new form when portrayed as a 'massive cement honeycomb structure', while my favourite image is the one Oliver gives to a landscape of night wilderness which includes a 'slalom of trees'; immediately I could picture those bare winter trees, staggered and stark in the moonlight.

The controlled nature of the walled and 'protected' cities is contrasted with the untamed wilderness that while beautiful, is difficult to survive in. And here lies the crux of the message: the freedom to choose does not create a fairy-tale world. The main characters are confronted with the painful dilemma of their choice in ways that reinforce the series' thematic backdrop: that the right to choose your path in life doesn't mean you'll necessarily be happy. Or as Hana puts it so succinctly, "You know you can’t be happy unless you're unhappy sometimes, right?" Right.