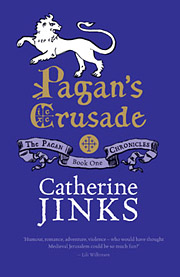 Pagan is a 16-year-old thief and beggar, trying to survive in 1187 medieval Jerusalem with no home or family. To find safety and escape those to whom he's indebted, Pagan joins the Knights Templar and is soon a squire-in-training to the admirable and good-hearted, Lord Roland. The irreverent Pagan must learn to fight, clean, escort pilgrims to holy areas and shrines and - most importantly - hold his tongue!

But even the life of a Lord is never as perfect as it seems. Pagan's journeys with Lord Roland will take him from Jerusalem to France to renunciation of the sword and life in an Abbey, where perfection is also in question. As Pagan grows and matures, his experiences lead him from apprentice to mentor, and to situations in which he must re-evaluate all his previously held values and ideals.

This action-packed and humorous series is narrated in Pagan's sarcastic and witty voice. It is loaded with down-and-dirty details of medieval times and brings to life Medieval Jerusalem and the Crusades.