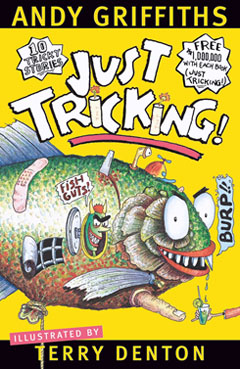 Reading level: Ages 7 and up
Books in series: 8
Read in order: No
Next book: Finished
Tags: comedy & humour  illustrated  family

A wildly popular series of funny, fast-paced short stories told by young Andy, who considers himself the world's greatest, craziest, most annoying, and most stupid practical joker. The series contains many different styles of story, including stories told in the form of lists, choose-your-own adventures, comic strips, playscripts and letters. And all are accompanied by talking page numbers, cartoons and flick pictures in the margins by Terry Denton.