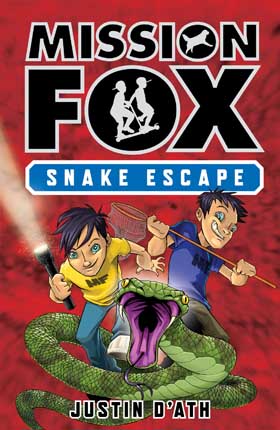 Twin brothers Harry and Jordan may seem like ordinary kids, but they're not. When their mum isn't looking, the boys morph into secret agents and with their big, fuzzy dog Myrtle, form Mission Fox, dedicated to the protection, care and rescue of animals that are lost or in danger.

These delightful super-heroes are the stars of 'Mission Fox', an outstanding adventure series for younger readers. Illustrated by the talented Heath McKenzie and written by award winning author Justin D'Ath, Mission Fox is a great follow-on from D'Ath's hugely successful 12 book series, 'Extreme Adventures'. Sam Fox is the popular central character in 'Extreme Adventures' and his younger twin brothers, Harry and Jordon, pop up in those books, so this spin-off series gives the twins a chance to shine. Kids will love the 'Mission Fox' series, which is filled with adventure, cliff-hanger action, spy gadgets and lots of facts about wild animals.