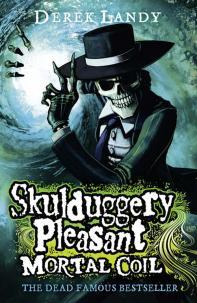 Skulduggery Pleasant is back, and reunited with his original head. But all is not well in the magical world - for one thing, foreign powers are conspiring to take over the Irish Sanctuary, and for another thing, Valkyrie has discovered she might be the sorceress set to destroy the world. The problem is, she doesn't feel she can tell Skulduggery what she's learned... and that's how all the trouble starts.

With Valkyrie on a quest of her own, to seal her name and prevent her evil destiny from coming to pass, Skulduggery and the gang are even more vulnerable. Which is a shame, because remember those thousands of remnants, imprisoned in the Midnight Hotel? Well, now they're out. Not only that, but they believe Valkyrie is their messiah. And that means thousands of wicked souls, desperate to get to Valkyrie, willing to kill anyone in their way... Oh, and because they can possess any body, they could be ANYONE. Now Skulduggery, Valkyrie, Ghastly and Tanith can trust no one. Not even each other...