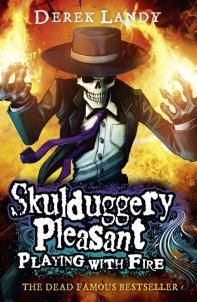 Valkyrie Cain - once known to the world as twelve-year-old Stephanie Edgely - has learned a great deal since beginning her apprenticeship to Skulduggery Pleasant, the well-dressed living-dead wizard-detective. But she hasn't learned nearly enough to defeat the horrors massing against her and her friends...

An old foe of Skulduggery's, Baron Vengeous, is bent on bringing back to life the horrible Grotesquery - an unkillable monster assembled from the most fearsome beasts of legend. It's up to the ingenious, fearless, and hilarious Valkyrie and Skulduggery to stop the Grotesquery from coming fully to life. Because once it is alive it will summon its masters, the evil Faceless Ones whose return will mean the end of the world.