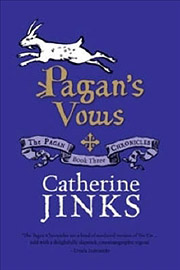 Monks, monks, monks. Monks everywhere...crammed together on their chapter-house seats like bats in a cave. Like crows around a corpse.

Pagan is back! After renouncing the sword in Pagan in Exile, Pagan and his noble Lord Roland become novices at the Abbey of Saint Martin, where they will prepare to learn the twelve steps of humility and take the oath of obedience. But as Pagan soon finds out, neither humility nor blind obedience comes easily to him. And while Roland sets his eyes firmly on the face of God, the more worldly Pagan discovers just how corrupt and dangerous life in a monastery can be.

Recognition: Winner of the Children's Book Council of Australia Book of the Year Award, Older Readers (1996)