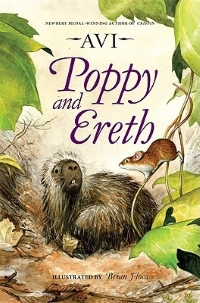 Poppy, a deer mouse, and Ereth, a grumbling porcupine, have been the best of friends for as long as the animals of Dimwood Forest can remember. An unstoppable pair ever since they defeated the tyrannical owl, Mr. Ocax, Poppy and Ereth have enjoyed many happy adventures together. But when a swirl of bitter winter storms buries Dimwood Forest in snow and Poppy's husband, Rye, dies suddenly, all Poppy wants is some privacy. "Dancing doorknobs," Ereth mutters to no one in particular, "how can she not want to see me?" As he waddles back to his log, Ereth fears he may have lost his dear friend forever.

But Ereth has not lost Poppy, at least not yet. As the ground begins to thaw, life returns to Dimwood Forest and Poppy ventures out in search of excitement. Suddenly, swooped up by Luci the bat, Poppy is flying high over the forest and unexpectedly embarks on her greatest adventure. Meanwhile, Ereth, left to his own devices, manages to convince himself that Poppy has died and, as only the old porcupine can do, sets about to give her the best memorial service the forest has ever known.

The last episode of the Poppy stories, Poppy and Ereth is a rousing adventure befitting one of the great heroines of children's literature as well as a final, heartwarming celebration of the life, love, and friendship of two most unlikely companions.