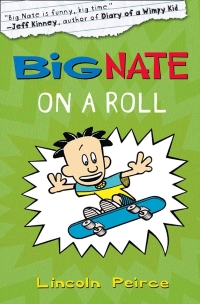 Big Nate on a Roll

Big Nate's scout troop is fundraising and while door-to-door selling isn't really Nate's thing, there's nothing like a Grand Prize to get him motivated. Especially when the prize is an awesomely cool customised skateboard (and following an incident with a poodle and a bridge Nate is in need of a new set of wheels.)

Nate HAS to win the prize but to do that he must out-sell Artur -the luckiest boy at school. Will Nate beat Artur to the prize (and possibly win over Jenny)? Or will he just end up in detention?