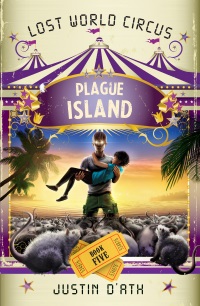 Colt is on the trail of two of the last regent firebirds in the world, who have been birdnapped by a foreign billionaire. But during the chase to rescue them, he loses the most important thing in the world – his best friend, Birdy.

What follows is a wild ride involving a sea plane, a mysterious stranger, an uninhabited island, and a colony of ghost rats who are acting very strangely . . . Will Colt and Birdy make it out alive?