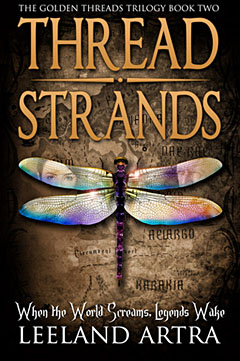 Ticca and Lebuin thought they had escaped their pursuers, but a new trap was waiting in Algan. Ticca, Lebuin, and Ditani are about to discover shocking truths about their attackers and themselves. Joined by unlikely allies, they find themselves in a deadly race for forbidden knowledge that might prevent the coming disaster. The mysterious Nhia-Samri, led by the evil, demi-godlike Grand Warlord, continues towards its unknown goals.

Meanwhile, the Gods and kingdoms find themselves preparing for war with the Nhia-Samri. Duke, fearing something deeper, wants to destroy the Nhia-Samri once and for all. But he must travel to Gracia, the capital of the Duianna Empire and seat of the Alliance of Realms, to convince the Assembly to declare war to get the army he needs.