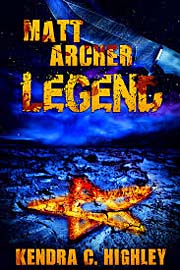 When Matt Archer was fourteen, he was chosen—by a magic, spirit-inhabited knife—to hunt monsters with a special paranormal division of the Army. When he was fifteen, he was thrown into a global war the rest of the world didn’t know existed.

Now Matt’s sixteen and the war has cost him more than he ever thought it would. He’s also learned that the knife-spirits have an agenda he doesn’t totally agree with. The only problem? The spirits have the upper hand, and they plan to control the fight—and Matt.

Then things get worse: the next lunar eclipse cycle is starting, a prominent physicist has gone missing, and Matt’s best friend is thinking about quitting the team. If he loses Will—after everyone else he’s lost—Matt’s not sure how he’ll fight alone.

As the source of his nightmares starts to creep out of the shadows, Matt knows he’ll need all the help he can get…because being alone could prove deadly.