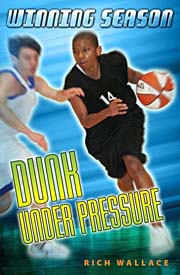 The guys call him Dunk, but Cornell Duncan couldn’t dunk from a six-foot ladder. He’s flat-footed and slow and can jump only about two inches off the ground. but put him at the foul line and he’s a star—a free-throw magician. that’s the main reason he made the Hudson City all-star basketball team, which, if the team keeps winning, is headed to the state tournament. but just when Hudson City seems to have a good chance at going all the way, Dunk gets a wake-up call. Following a few disastrous minutes off the bench, he realizes that it’ll take more than free throws to make him a real all-star.