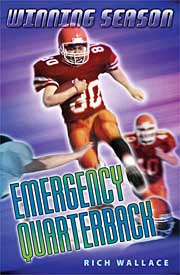 Jason Fiorelli is having a great year as wingback on the Hudson City Hornets. Twenty-seven receptions, six touchdowns, and fifty points for the season! Now with only three games left, the league title is within reach, until—disaster—the Hornets' star quarterback has a season-ending injury. And Wade, the replacement quarterback doesn't have the talent to take charge.

In a surprise move, Coach sends Jason in as emergency quarterback. It's an opportunity to save the season, but it also feeds the rivalry between Wade and Jason. With the championship game drawing near, can the Hornets pull it together in time to work as a team?