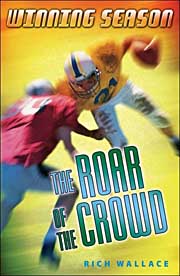 The Roar of the Crowd

Manny's starting his first football season with the Hudson City Hornets, and he's determined to get in the game and not warm the bench. Problem is, Manny's not a big guy, and when he tries to tackle the offense, he's the one who ends up on the ground. Coach isn't too pleased, especially when the team starts losing. But Manny refuses to give up; he's as tough as anyone out there and he's fast. He's got the season to prove to Coach, his teammates, and himself that he has the talent to earn the roar of the crowd.