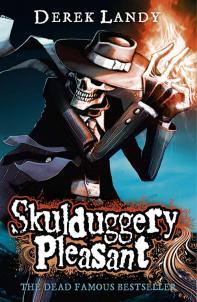 Skulduggery Pleasant (Scepter of the Ancients)

Meet Skulduggery Pleasant. Sure, he may lose his head now and again (in fact, he won his current skull in a poker match), but he is much more than he appears to be — which is good, considering that he is, basically, a skeleton. Skulduggery may be long dead, but he is also a mage who dodged the grave so that he could save the world from an ancient evil. But to defeat it, he'll need the help of a new partner: a not so innocent twelve-year-old girl named Stephanie.

Stephanie and Skulduggery are quickly caught up in a battle to stop evil forces from acquiring her recently deceased uncle's most prized possession — the Sceptre of the Ancients. So Stephanie and Skulduggery set off to find the Sceptre, fend off the minions of the bad guys, beat down vampires and the undead, prove the existence of the Ancients and the Faceless Ones, all while trading snappy, snippy banter worthy of the best screwball comedies.